The idea behind this post was inspired by a conversation I had the other day with a young American traveler. He definitely played into that North American stereo type that most of us are trying to shed when we are in other countries. It seemed as though he thought he could do whatever he wanted without consequence. The conversation started out with the regular run of the mill traveler chit chat. We talked for a bit about our travels and how we have been affording to travel for so long. I have been teaching English and writing, while he has taken on random jobs here and there.

The conversation turned when he told me he was going to Vietnam to teach. He had heard that you can make a “butt load of money” there.  I then proceeded to ask him if he was certified. He laughed and said no. As someone who has taught in Vietnam I know that you need to have your TEFL or a similar certification to teach. I asked him if he was going to take a course, again he laughed and said no. He then proceeded to tell me he was just going to forge a fake certificate. This bothered me on so many levels.

While it’s not the hardest thing in the world to get certified, it at least gives you the basics for teaching and shows that you have some interest in teaching. It just seems so disrespectful to think you can go into another country to teach without experience and solely for the purpose of making a bunch of money. People in foreign countries work hard to pay for their classes and truly want to learn English.  If you're going to teach , it should be something you're willing to put effort into and be fairly passionate about.

The conversation led me to think about my own travels. Have I been respectful enough in the places that I lived and traveled? Do I really take the time to understand the different cultures and my surroundings? Am I making sure that I'm doing the most I can to reduce my impact on their environment?  Truthfully, though these things are always in the back of my mind, they do fall to the wayside from time to time.

Do you take the time to think about these things and consciously make an effort to do them while traveling?

These 7 accounts have some of the most spectacular travel photo’s on Instagram, but they aren’t only limited to that. They will also educate and allow you to have a better understanding of the places they are in.  These photographers take photo’s with a purpose and will hopefully inspire you to care just a little bit more about this wonderful world that we are privileged enough to be apart of. 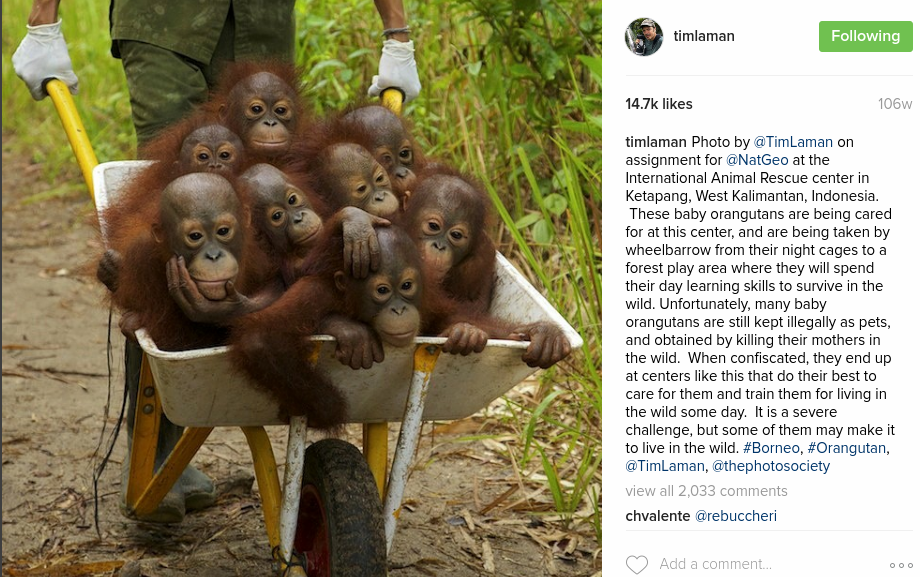 Why we love him: Tim Laman is a wildlife photojournalist, field biologist and conservationist. He uses his knowledge and skills to take some amazing photos, while spreading awareness for causes he finds near and dear to his heart.  Laman’s passion for wildlife draws you in and makes you want to know more. 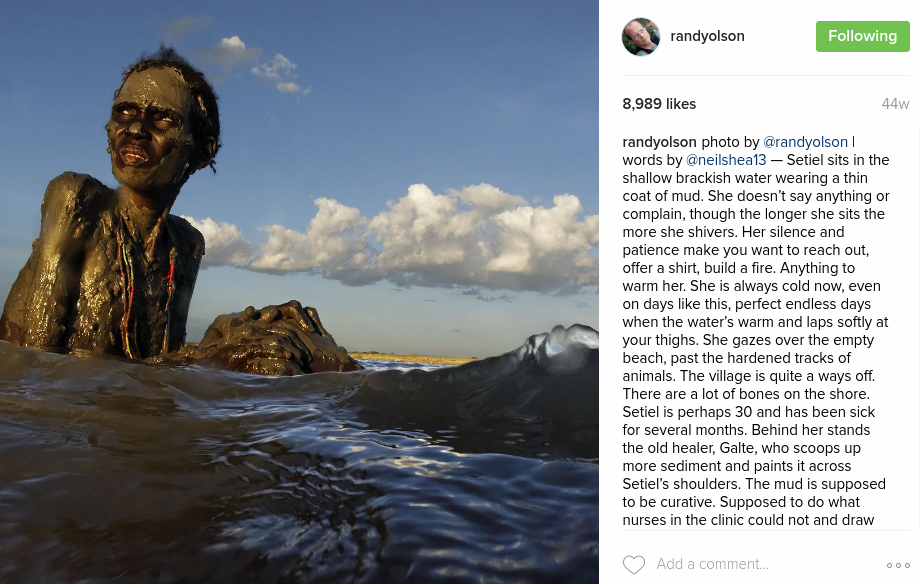 Why we love him: Olson has been taking socially responsible documentary style photo’s since the 80’s. Over time he has developed the ability to capture his subjects in a way that makes the viewer feel as though they are there with them. In addition to that, he often teams up with Neil Shea who writes the narrative for the imagery. Shea’s narrations are more like beautifully painted stories. This combination makes following Olson’s account extremely worthwhile.

Why we love her:  Vitale is a versatile photographer and has not limited herself to one focus or cause. She has covered environmental issues, wildlife conservancy and human interest stories throughout her career.  Ami believes that it’s important to live the stories she tells. She has even lived in war zones in order to get a better understanding of her subjects. Her instagram account is a reflection of this. You get the feeling that she really cares for and believes in what she is doing. 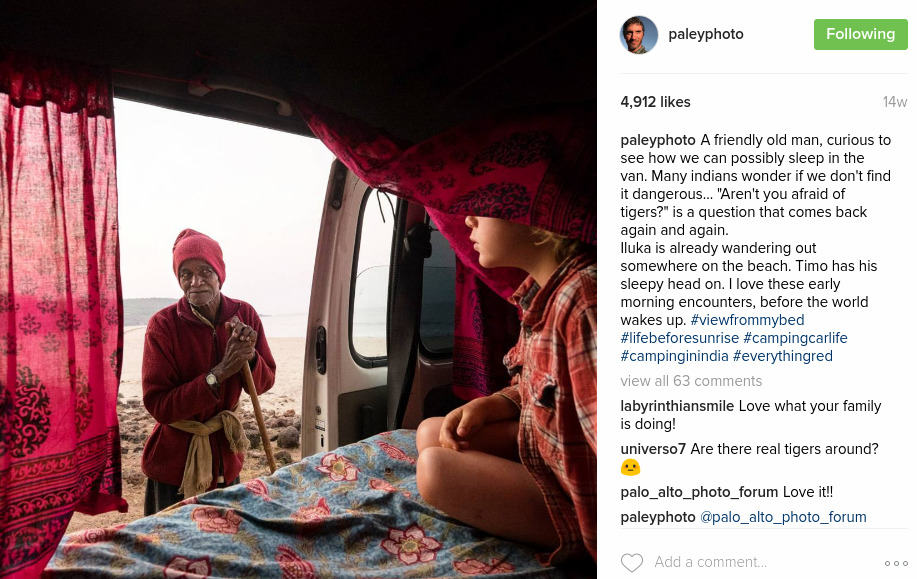 Why we love him: Matthieu Paley is a travel photographer and contributor to National Geographic. Paley takes photo’s of everything he encounters during his travel, but his ability to display the human spirit is exceptional. The other really cool thing about his Instagram is that his family comes along on his adventures with him. It's quite interesting to see his young children adapt to new cultures and places.

Why we love him: Skerry is an underwater and marine photojournalist. His photo’s are imaginative, capturing the beauty of Sea life in seemly impossible ways. Brian's Instagram is especially engaging because he also gives us important conservancy information about the subject being photographed.

Why we love him:  Kashi is not only a photojournalist, he is also a filmmaker, educator and lecturer. He only does projects that he is passionate about and believes that documentary photographers can positively influence the world. Ed’s main focus is social and political issues in our current society. His Instagram often has a series of photo’s related to the same issue. Each image has a story to go with it. This allows the viewer have a real understanding of what is happening in these places. 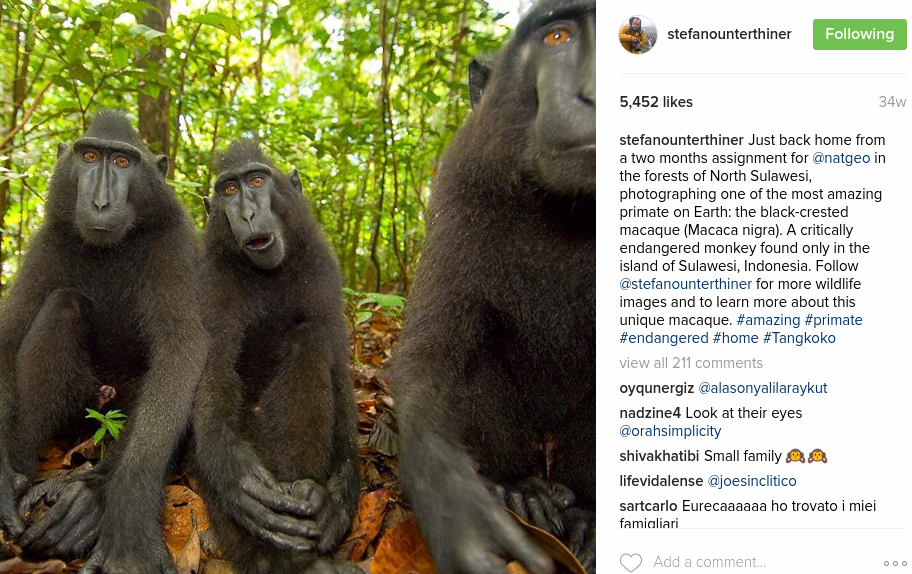 Why we love him: Stefano studied Zoology in university, but photography was his first love. Eventually that love took over and he became a full time environmental photographer. His affection for wildlife is very much present on Instagram. Stefano likes to get up close and personal with animals in many of his photos, capturing the facial expressions of his subjects. His images are accompanied by some quick educational info about the wildlife.